gmccarthy Posted on August 9, 2013 Posted in Uncategorized No Comments

The question was posed as to whether one would both pair and then subsequently reward from handler. 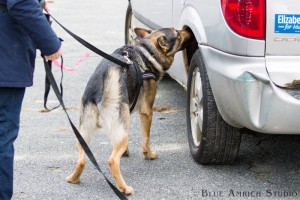 There are many, many ways to train a detection dog.  And some ways work for some dogs and other ways work for other dogs.  But I have found that allowing the dog to both self-reward and to be supplementally-rewarded works extremely well for the majority of dogs that I work with.  So, in my classes, we  put value – a lot of value — on the source by “pairing” the odor of birch (or anise or clove) with a luscious, salient reward-food that the dog really, REALLY likes.  (Alternately, if the dog is more toy-driven than food-driven, you can use a toy in the same manner as reward-food is being used.  Please read another blog on my website www.scentinelnosework.com as to some ways to properly reward with a toy).  I have my students sprinkle 5-6 pieces of the stinky reward-food (or the toy) into what I call my “bowl-sandwich” and place the “bowl-sandwich” into a box (“hot-box”) and shut the lid.  When the dog finds the “hot-box,” I instruct my students to immediately open the lid and allow the dog to self-reward on the food.  When the dog has finished self-rewarding, I then have my students drop anywhere from 5 to 40 pieces of food in the top bowl, one piece at a time (i.e., “supplementally-reward”). Keep the amount unpredictable but the reinforcement over odor should be more, not less, in this early stage.  You are imprinting value on the odor, so make it a super strong association with heavy reinforcement.  Also, make sure that the hand that is dropping the food into the bowl does not move further away from the top bowl than 2 inches because you want the dog’s nose to stay in the top bowl and not swivel back and forth following the hand that is dropping in the food.  The dog must learn that he gets the food in the bowl and not from your hand and start to orient to the bowl more and more.  Each time you repeat this training, the dog will be inhaling the odor of birch (or anise or clove) as the dog is self-rewarding and then being supplementally-rewarded.  The longer you have the dog inhaling the odor while he is being rewarded the stronger the association between the odor of birch and the salient reward will become.

In time, by doing this, the dog associates the odor of birch (or anise or clove) with that salient reward-food (or toy) and the dog learns to love the odor just as if it were the reward-food.  This is pure classical – i.e., Pavlovian – conditioning at its best.  And we condition in this concept that “odor is important” (i.e., “odor obedience”) in the context of HUNTING for the odor right from the beginning.  Thus, I believe that K9 Nose Work Training is “hunting-based” as opposed to “obedience-based” from the start of our training.  If done correctly, you should end up with a dog that eagerly hunts for the odor of birch and pushes toward source when the find is made.

Take a look at the following two YouTube clips of my dog, Cajun, working some blind hides — blind to both Cajun and me.  Cajun is a product of this training system. Cajun is a mega-testosterone boy and definitely has it in him to be distracted by other “of-male-interesting-extraneous-odors.”  So, I have been very careful to keep the motivation for the search – on my terms, not his 🙂 – as high as I can make it.  And so, can Cajun in these clips be any happier at making his finds?  Can he be more focused?  And can everyone tell “when” he makes his finds?   In one video, Cajun is so into “making the find” that I think I surprise him when I start to reward him!  🙂

JMHO but I hope this helps!

Tagged with: Self-Rewarding and Supplementally-Rewarding